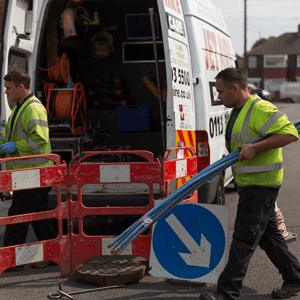 Whether it’s the late arrival of a taxi or the overdue delivery of a takeaway, most of us have experienced the annoyance of being kept waiting as a customer. On the flipside, it’s always a pleasant surprise when goods or services are provided sooner than promised. That feeling of surprise is one that Jet Aire are proud to achieve on a regular basis and we were delighted to hear from John, a Northumbrian Water customer who was so impressed by the speed of our response that he was compelled to write to us with some very positive feedback. Here’s what John had to say:

“I would like to pass on some praise for Northumbrian Water and its contractors Jet Aire. This morning my wife noticed that the sink was very slow when emptying. I went out and lifted the manhole cover and found it was blocked downstream. At 13:00 I phoned the helpline number and was put through to the Essex call centre. The young man took all the details and said someone would be out a soon as possible but within four hours.

Within five minutes the Jet Aire lady was on the phone and said again someone would be out but definitely before 17:00. Twenty minutes later the crew called and said they would be here in fifteen minutes. Within ten minutes of arrival, the blockage was cleared and a camera check was done, all within an hour of the call. Very well done and thanks to all involved!”

We’re very glad that John had such a positive experience with Jet Aire. We that hope his local taxi firm and takeaway are just as quick to respond!